Skip to content
This quick review was provided by Norienne, who is gluten free due to Celiac Disease.

I was somewhat concerned about Chefs de France, as I had read a review where someone with food allergies had a terrible experience. Fortunately, my fears were unfounded!

My husband and I came here for dinner. I had noted my dietary restrictions when making the reservation, and mentioned them again to the hostess when we checked in. We were seated just a few minutes past our reservation time. Our waitress was very nice. I asked her about seeing a chef, and she told me that nearly everything on the menu except the pasta could be done gluten-free. She said to look through the menu and see what I wanted, and she would go and double-check with the chef. 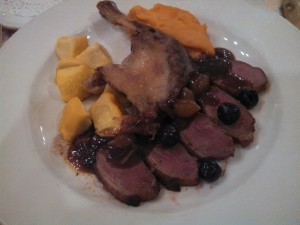 I ordered the duck breast and leg confit with cherries, sweet potato puree, and patty pan squash. A few minutes later, the chef came out and explained that the sauce the duck usually came with was made with a roux and thus not gluten-free, but that he could substitute another sauce, which I said would be fine. Soon after, my husband was given a demi baguette and I was given a warmed gluten-free roll, which was a little dry but still nice to have. The duck was very good. The sauce was served on the side and was, I think, the sauce that usually goes with the short ribs. It was rich and had pearl onions in it, and went better with the duck and cherries than I would have expected. The sweet potato puree was smooth and velvety, and the patty pan was perfectly cooked and well seasoned.

For dessert, I was offered sorbet, chocolate mousse, or creme brulee. I chose the creme brulee, and it was my favorite dessert of the entire trip. Overall, everything was delicious and I would definitely recommend it.

If you would like to review Chefs de France or any Disney restaurant, submit a food allergy dining Quick Review.

When we were at the Magic Kingdom, we walked by a store that had a sign that stated, "Rice Ice Cream available", or something to that effect. My son was so excited that he could have ice cream from a store!